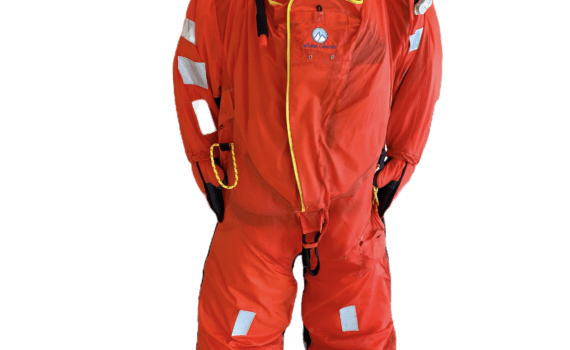 The Pilmic company, an Argentinean based safety concern tell us it has come up with the ultimate in immersion suits and has received approval for the product from the Prefectura Naval Argentina (PNA) effectively the country's coast guard service and part of the interior and national security defence systems. The suit certainly appears to offer a high value safety option for merchant and private sailors and the like particularly in regions where hypothermia presents a very real hazard.

A video of the suit in action can be seen HERE and shows not only its ability to float in the traditional position with the wearer on his or her back but demonstrates, despite it's obvious bulkiness out of water, the suit's ability to enable swimming either on back or front, the possibility to simply ‘stand' upright in the water and float vertically and the transparent plastic ‘tent' which can be worn whilst eating, drinking or simply lying back.

Ergonomy - pre-shaped construction with 100% freedom of movement
Breathability - durable fabrics with highly breathable properties from GoreTex
Lightweight - made as a shell product to reduce weight
Ventilation - pit-zips (underarm-zips) to enhance ventilation in controlled situations
Waterproof zip in collar for easy donning
Pockets - roomy pockets constructed with mesh to enhance the breathable properties of the fabric and placed where they are of no hindrance to normal movement
Gloves and hood in neoprene, lifting becket and pen-pocket
For easy integration with safety equipment as harnesses and SeaLion lifejackets, the suit is "clean" on both chest and back
The suit fulfils the requirements of the IMO/Solas LSA code, as a 1 hour immersion/quick donning suit without internal buoyancy