When we bought our house three years ago, little did we know that I would be expecting our first child two weeks after we moved in.

I spent that first summer pregnant, lazily floating in our neighborhood swimming pool appreciating the buoyancy’s soothing effect on my ever expanding frame. The following summer, we took our son to the pool as soon as he turned 3 months old. Every week, I would look forward to sunny days spent with my son as he kicked and splashed in the water. I held him in my arms and used an inflatable tube with a built in seat in the middle to float him from end to end. Like me, he took to the water and we created memories together.

I had started wondering if there was a water version of baby carriers. So I reached out to some online friends and was introduced to the Juju Roo Water Baby Carrier.

When I received it, I took it out of the packaging and read through the simple instructions which include five steps and ten black and white photographs.

I’m a visual learner, like most people, and found the photos in the instruction manual to be a bit incomplete. Only one showed an actual child in the carrier and that shot only had about a third of the child pictured. It would have been more helpful had they shown several pictures with the child in it. Luckily, I had kept the packaging and used the color photos to figure out which way was front.

It took a few times of flipping the carrier over to figure out how to put it on as it had so many straps and so little fabric. Once on, it took a minute or two of adjusting the straps, but I found the part the baby sits in and picked up my son and slipped him into the carrier. I then realized that this carrier was one that requires the baby to hang from his crotch. This is something that I won’t do with my regular, daytime carriers. This was definitely a turn off for me. Plus, at 5 months old, I liked to keep him facing in when carrying him in my daytime carriers. However, the pictures on the packaging showed the moms carrying their babies facing out. (Update: After looking again, I did notice one mom carrying her baby facing in.) Needless to say, I was skeptical.

The first time I used the Juju Roo at the pool, I made sure to have my husband with me since I was testing it out and was not confident that I would like using it, especially with an enthusiastic 2 year old also in the water. I had visions of needing to rush to my older son, while my infant was slowly being submerged. So while my husband was with our toddler, I slipped on the Juju Roo and put my baby into it. Even though it is made mostly of straps, it was quite comfortable as I carried my 15-pound. baby.

I really liked how wide the back pad and the shoulder pads were. They keep the straps from cutting into the skin, which is nice, especially while wearing your bathing suit. I walked over to the steps to get in, while other parents looked questioning.

Was I really going to put my carrier in the water?

Oh no, I explained. This is no ordinary carrier. It’s made for the water. I started out in the 3-foot section, making sure I felt comfortable having my baby strapped to me in the water. I then kneeled down and realized that even though I was not a fan of the crotch carriers for everyday use, it wasn’t so bad while my son was partially submerged in the water.

As he began to float, he leaned back against my chest and started splashing his arms and kicking his feet, much like he does during his baths. Since he wears a sun hat, I found that it was difficult to see his face while he was facing out. I like to check in on him while he is in the water to make sure the sun and water aren’t in his eyes. It was harder to do with the JuJu Roo, but not impossible.

I then walked over to the 5-foot section. Still not quite used to the idea of wearing my baby in the pool, I kept my hands on him as we went deeper and deeper. But then it was fine. (Now, I must mention here that I am 6’1” for two reasons. First, our pool only goes to 5 feet deep, so being tall, I was fine wearing him into the deep end, though I did tend to keep my hands on him to steady him. Second, I wanted to make sure to point out that the carrier is fine size wise for taller users.) My son stayed pretty content in the carrier for about 20 minutes. Then I removed him and let him have some free time in my arms.

The next two times I used the carrier, it became quite easy to put on.

I again had someone else there because not only was I still a bit uncomfortable using it alone while my toddler swam near me, but I also find it to be more fun to go to the pool with others. I had a similar experience as with the first time. He loved it at first, but only stayed content for about 15 to 20 minutes. I do look forward to using it again this summer, but we’ve had so much rain lately, that I haven’t had a chance. We keep it on our front porch, which is covered, while not in use. It seem to dry just fine there. Carrying it is a cinch as it’s pretty light weight.

Overall, I’m glad I have the carrier. We will be going to a family reunion in a few weeks which will include a trip to the water park. I plan on bringing both the Juju Roo and the inflatable tube for my baby to use.

Waterland is an innovative carrier that can be used both – in water and on Land. Allows you to enter safely with […] 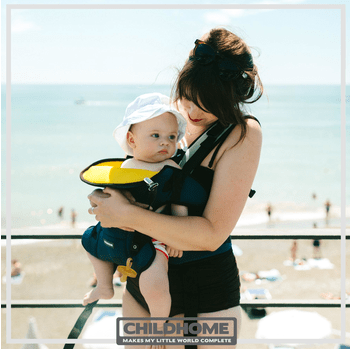 Childhome Neoprene Waterproof Baby Carrier is useful if you want to cool off on a warm summer day with your baby. Thanks […]