Lifejacket and safety aid manufacturers have been paddling hard to stay on top of a wave of change. However, Stevie Knight finds that some developments have arrived with hefty design implications…

While the recent changes in EU regulation have made their mark, requiring much more stringent testing of the both the product and the materials, Crewsaver’s Guy Page says lifejacket development has been pushed as much by a change in perception.

‘These devices used to be sold as a batch set for a boat,’ he says, ‘but now people are taking a personal interest in getting the right jacket for them.’ David Lewin of Secumar agrees that things have changed. ‘Not that long ago, lifejackets were stowed away, and not taken out unless trouble was brewing. It’s now a personal item.’

Unfortunately, we all know that trouble can sneak up while you are unaware. Baltic UK’s Keith Hughes adds that in this respect, the RNLI’s campaign of ‘useless if not worn’ has done a great job of catching the public eye.

We deal in ‘quality products’ says Mr Hughes. ‘We have been doing it for years, but many people aren’t aware that there’s a big difference between, say, a good quality product and a far-Eastern ‘economic miracle’. Not unless they – or one of their family – goes overboard – in which case they may well regret the cost saving.’ Mr Hughes adds that the cheaper versions might not give you the saving over the longer term, as higher quality materials also mean that the jacket or aid has a longer useful life.

These better devices benefit from a large slice of research and development. One of the main areas that has gained from R&D are the turn rates – this is the all important time it takes to get an unconscious or helpless body’s airways clear of the water.

Gasp reflex
Andy Goddard of Andaark explains, ‘No matter how good a swimmer you are, the cold in these northern waters, especially in winter, gives you as ‘gasp’ reflex which means you take a big and involuntary breath when you get submerged. On top of this, the cold can send your muscles into spasm and this can stop you helping yourself turn in the water.’

Unfortunately, an advance in one area can mean a difficulty in another, and the turn rates have been affected by associated developments in technical clothing.

‘People are wearing more and more layers. Each layer traps air, as it’s supposed to. However, if you end up taking a dive into the water, a bubble can form on your back which may well keep you from turning over easily,’ says Mr Goddard. Further, he adds, the introduction of drysuits have added to the problem as they are very efficient at keeping a layer of air near the body.

David Lewin of Secumar adds that a bubble trapped in the clothing layers can be large enough to push a helpless person over not just laterally, but head over heels, unexpectedly forcing his or her face down into the water.

However, a couple of the newer lifejacket designs feature mesh webbing on the back which in itself helps to displace the problematic trapped air away from the back.

Overall, there are a number of other features designed to improve turn rates. Mr Lewin adds that the company’s 3D profile lifejacket is an important development. This features two extra inflatable swim bladder ‘wings’ that protrude directly out from the chest area forcing the body onto its back. It also features a fully enclosing spray hood.

Bladder designs
Spinlock, on the other hand, favours its own bladder designs to give a good all-round turn rates given every different kind of sea state. Chris Hill of Spinlock says, ‘While one feature may be very good for turn rates in one particular set of conditions, it may not perform as well in others. The challenge is to bring it all together, so you have something that operates well in all environments.’

But there are other parts of the design that are almost as important. Mr Goddard explains, ‘Cold water shock is a big killer, it takes all your energy away, so you can’t easily work at staying afloat. That’s why the introduction of the crotch strap and better, easier fitting has been such a good thing, as it stopped people having to work at staying in their lifejacket.’

The search for the best fit is an ongoing project for the main lifejacket manufacturers: many of the recent developments feature a ‘while-worn’ adjustment. ‘You don’t have to fiddle about and guess at the sizing of the straps while trying to take into account the fact that the last time you wore the lifejacket you only had on a t-shirt and this time you are wearing a full set of offshore waterproofs,’ says Mr Page. Mr Hill agrees that the systems are much simpler to fit now, no matter what the change in wear underneath. ‘You slip the lifejacket on, and simply pull on two straps, which brings the jacket snugly into your body’s contours and adjusting to your layers of clothing.’

And while comfort means that the jackets will most likely be worn, the fit is more central to survival than that. ‘Some of the problem in the past has been that there was too much trouble associated with adjusting the jacket. So if a person ended up in the water they had to struggle to keep themselves and the lifejacket together.’ The crutch strap (or, in the case of Spinlock’s version, thigh strap) was an important innovation in keeping the life jacket in place.

Mr Goddard goes on to say, ‘The spray hood is also an essential part of the jacket if you find yourself in the water in all but calm conditions as it not only stops you drinking sea water but also cuts down on heat loss from your head by wind chill and cold water protection .This in turn slows the onset of hypothermia.’

‘You are not talking about great margins for error here, as any energy expended can bear on survival times – and in cold water, they are simply not that long,’ concludes Mr Goddard.

Dimension
However, Mr Hill adds another dimension to the argument, and that is while a comfortable fit is needed, there’s a balance to be struck between getting the lifejacket’s wearability right and the support needed for the head and neck when inflated. This has to hold an unconscious body in the right position even if being pushed around by heavy seas.

However, there are also a number of innovations taking place on the firing side of the automatically inflating lifejackets.

At the heart of every lifejacket is a firing mechanism that either manually or automatically releases a CO² gas cylinder to inflate the flotation bladder. Roughly speaking, there are two sorts of activation mechanism: water-reactive (hydrophilic) and pressure (hydrostatic) triggers. Although the pressure driven units used to have a longer lifetime, most people say there isn’t a great deal to choose between them, especially as they all need checking or changing every year anyway for safety’s sake. Simple, effective innovations include things like colour coded strips to show that the firing mechanism has been correctly primed.

In most cases, the cylinder is fixed via a screw thread that relies on hand tightening to ensure a good seal to stop gas escaping. ‘However,’ says Mr Lewin, ‘it’s a fiddly job and in many cases they have been found to be loose.’ The Secumar 4001S firing mechanism has overcome this problem by using a bayonet fixing gas cylinder. The cylinder is simply inserted into the housing and turned ninety degrees to the right until it clicks. Added to this each bayonet fitting includes a firing pin so every time the cylinder is changed, so is the pin, stopping any chance of bending the pin whilst extracting the spent cylinder.

However, it’s a slightly different matter when you think about keeping children safe.

When asked about an inflatable jacket for youngsters, Mr Hughes explains that Baltic did originally do a child’s version, but there are a few very practical, mitigating factors. ‘Firstly,’ he says, ‘foam always works. Secondly, with children, you want both a ‘foolproof’ and ‘fiddle-proof’ design, something that doesn’t easily sit with an automatic firing mechanism. Lastly, kids always want to go out paddling… and this will obviously cause difficulties with an automatically inflating version.’

Interestingly, Baltic’s baby/child foam filled lifejackets have a wide collar that holds the child’s head on a supporting ring when in the water, the relative size of this collar reducing as the body gets proportionally larger, giving greater freedom of movement.

Storm
Spinlock has had to weather its own storm. A batch of lifejackets manufactured in 2009 were considered to be vulnerable to developing a fault with the internal assembly. However, Mr Hill explains that turning this event into an advantage was one of the more interesting challenges of the process. ‘We have had to contact a lot of people, reinforcing our belief that manufacturers need to take another level of responsibility for their products. We are now asking people to register their lifejackets, which includes upgrading the warranty from two to five years. It makes contacting such a large pool of people much easier, but also it means we can send out prompts by email, saying ‘it is time for your lifejacket to be checked or serviced’ … after all, it’s something people forget to do all too easily – and something we now provide with the Deckvest as part of our « Through Life Support Programme ».’ 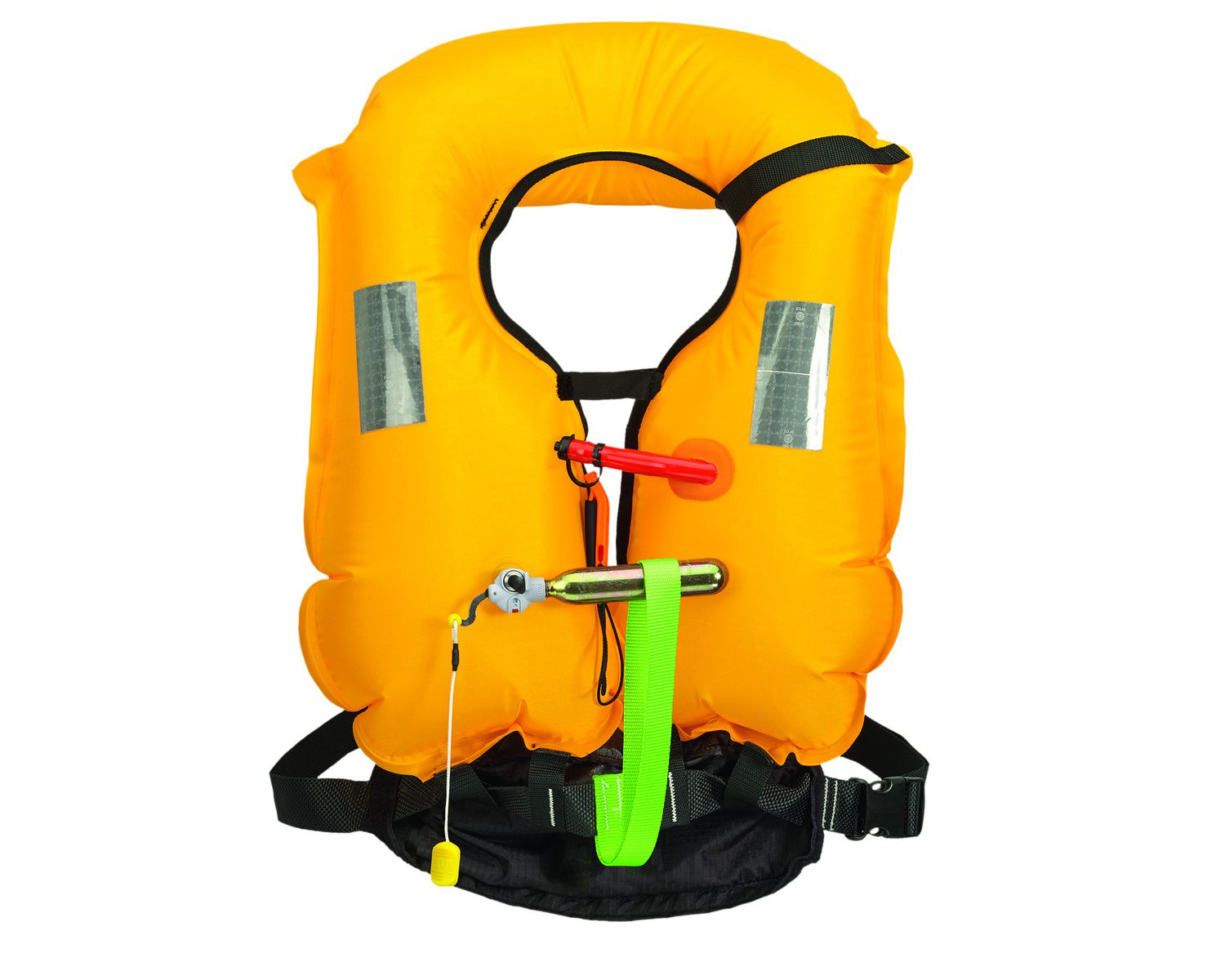